We were excited to again see the twins, Mercy and Sara, with their Dad when we visited their home in Kasompe, Zambia, last week.  Mercy was baby-sitting a neighbor child (far right), that weighed almost as much as she did, that she carried on her back.

The twins' mother died when they were 3 months old leaving the father with two tiny babies as well as 7 older children.  When our amazing kafwa found out about the twins and the desperate situation their father faced, they sprang into action providing modest clothing and food.  Knowing there was no electricity for a refrigerator, no baby bottles for feeding much less a way to sterilize them, and no money to purchase expensive formula, I innocently asked the kafwa what they fed the babies to keep them alive. They looked at me like I'd just landed from Mars!  When they recovered from hearing such a dumb question, they said, "Nshima [corn meal] porridge, of course.  We just made it thin and spooned it into their little mouths."

When the girls were old enough for school, the kafwa made sure they were enrolled in the Kasompe Community School of Peace even though they had to walk a long distance to and from classes everyday.  The girls are now 13 and handle all of the family's food preparations from buying at little shanty kiosks to cooking it for themselves, their father, and 3 older brothers who still live at home.  Quite a responsibility for such young girls.

Posted by Sherri Kirkpatrick at 1:05 PM No comments: 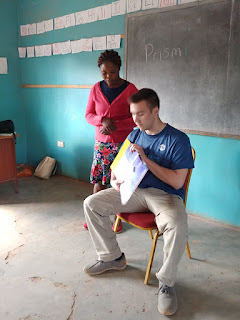 The kiddos loved having Braedon read them a story in their classroom at the Mapalo Young Peace Maker school in Zambia.  Not sure who had the most fun--Braedon or the students!
---------- Forwarded message ---------
From: Sherri Kirkpatrick <skirkpatrick@healthedconnect.org>
Date: Tue, Jun 11, 2019, 7:36 AM
Subject: Fwd: Enthralled
To: <healthedconnect.goodtogo5@blogger.com>

Posted by Sherri Kirkpatrick at 11:26 PM No comments:

HealthEd Connect, a non-governmental organization (NGO) was incorporated in 2009 with the mission:

To empower women and children through evidence-based health, education, and advocacy programs.

Where does HealthEd Connect Work?